TODAY is what has been dubbed the #Karankaversary. It a year since Boro appointed Aitor Karanka as their new boss. I think it is fair to say it has been a year of marked change on and off the pitch. A  year of of steady if not spectacular improvement in every department of the team and of results and performances.  And a year of reshaping of  the attitudes that surrounds the club. Karanka is all about professionally planned progress.

For me, that was evident from the day he arrived. Before that in fact. The club had been rearranging the furniture and finances behind the scenes for the best part of two years, rebuilding the infrastructure with sports science, scouting networks, the Academy and external links that plugged them into a network of intelligence and best practice to create a sustainable model for a  club of limited income but big ambitions. 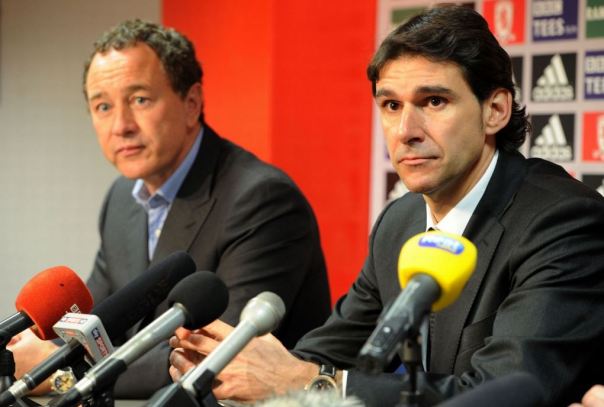 They had restructured the finances, trimmed the wage bill, balanced the books and created the headroom for a renewed, well resourced  promotion push based on VFM recruitment. We have talked Mowbray to death but his era was over and Steve Gibson had a massive decision to make.  He could not afford to squander the moment. It was probably his most important appointment since Bryan Robson and one that would determine the club’s fortune for years to come. He had to get it right with a manger that bought into the project, was able to work on a budget but – crucially – was able to quickly deliver a meaner, leaner team that delivered success. That is the tricky bit, getting the right fit.

Has he done that? The early signs are good. A year on Boro are well placed, are looking like a team that can only get better and, judging by the results of the Gazette’s Karanaka first annual report, supporters are upbeat and confident in the manager.

Here’s a few things I wrote at the time as background.  In a couple of lengthy discussions with the chairman I was given an insight into what the club’s intentions were, what the strategy and philosophy was and why they had to get it right.

And on the day itself – which started with a breakfast meeting in the inner sanctum at Rockliffe for myself and Mr T  – here’s my “Basque To The Future”  bit I wrote on why Karanka ticked all the boxes for the club and was key to their ambitions and here’s the exclusive Q&A with the chairman over the cornflakes.

There will be loads of stuff in the Gazette over the new few days, especially interesting is the in-depth sit-down Philip Tallentire did with him over the summer, a really good insight into his youth, his Basque heritage, this thinking and his  willingness to learn. Look out for those.  The first bit is here.

And to add to the debate, here’s an honest and perceptive blog bit by our resident vocal Karanka-sceptic Paulista Park – a passionate advocate for the ‘Spirit of Teesside ethos under Mogga – on how the Spaniard has transformed Boro in his first year.

So, how has it been for you? How much has Karanka changed the club? Has he the ability and determination to deliver promotion? Has he been a success? Or is it  too early to tell? And has the transformation come at a cost of the club’s Teesside accent? What say you?

The Gazette Boro posse have also done a trial podcast, a kind of pre-season friendly run-out to blood new technology and platforms. We just riffed a bit on the theme of Aitor’s first year in charge and his ruthless and painfully professional approach in which I suggest he is so tough he would drop his grannie from Christmas for failing to close down the cranberry sauce last year. You can listen to it here.

If it gets an audience of more than a reserve game we may make it a regular thing. It is as yet nameless and we are inviting suggestions. The winner gets eternal glory and the chance to brag to mates. You can tweet your ideas to @GazetteBoro.